Another good day out on the wrecks in the English channel out of Weymouth with Chris Caines and Aaron on the Tiger Lily. Tried out the new savage soft 4 play real herring shads coupled with out little fish jig heads and eagleclaw 635 hooks. Fist drift nice cod and it it hit as soon as I touched bottom.

The shad worked well only downside is they’re soft plastics and the teeth on the cod soon ripped them so take that into account they’re a good realistic swimming lure and will catch fish but don’t expect them to last too long.

Some really good Cod taken around the crew and everyone went home with some good fillets for our freezers. I also managed to try out some new lures too but more on those soon once I have the images done and catch video, just toooo bizzy catching the fish but someone has to do it !!!! 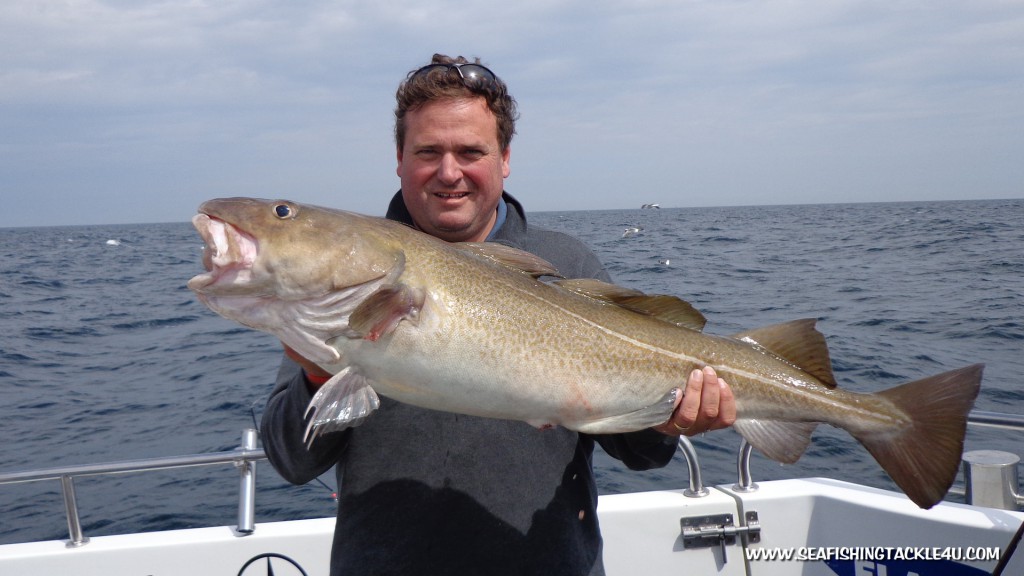 All our latest lures are going up on Ebay and they will be here in the Blog/Store soon once all the images and video work is completed. New Totally Braid and Mono friendly
Sea Booms also now available in my Ebay store also FireBelly Lures and the Ulitmate Eels and Worms collection now launched.

Monday 11th June and a much needed day out fishing with my son Andy who has struggled all year so far to get a day off from his own business. A wrecking trip for the Cod on Chris Caines boat Tiger Lily and a singles day so a good mixed bunch of guys.

I hadn’t planned to do any filming other than to get some rigs and more new lures plus test out a new super light strong and very braid friendly sea boom I am about to launch, oh and by the way it worked a treat and stood up to getting caught in the wrecks and taking some good prime cod.

Weather was perfect and the crew were a good jovial bunch and Chris was supported by his crewman Aarron who is very supportive to the anglers in netting the fish, providing help and the tea of course. When we arrived at the first mark I put on a rhubarb fat tail worm and the new sea boom plus a 10oz ball weight with 20lb rotten bottom link and Andy one of our twin tail little fishy rhubarb and custard lures.

Bang he was into cod straight away and landed a nice fit fighting 8lb fish and I hooked into one about same weight. On the boat was a father and son team and the lad was about 12 years old but new exactly what he was doing and got into some nice cod pretty quick too. See the video and you will see just how hot he was and outfished his father and many other anglers on the boat.

We went home with a good bag of filleted cod for the vac bags and the freezer and some pricelss video was shot showing the next generation of quality young anglers coming along so how good is that !! I am out again on the 20th of June and will be doing final testing of the braid friendly sea booms and if all goes well they will go on sale just after.

Well here it is I have edited in a picture of my 19lb Pollock obviously I can’t catch specimen fish and film so a couple of images were taken of it and the weigh in with some doody mini electronic scales from Fishzone. So not only did we test lures we caught fish that tested the scales too.

Enjoy the movie the weather was kind but overcast so looks dull day but it certainly wasn’t dull on the boat with a very jovial crew so some good banter along with the fishing. Play the movie at full screen 1080p quality sit back and enjoy as we did.

The Rocket does it again under the experience of the skipper owner Trevor Small who mailed me with a short notice invitation to spend a day on the Rocket filming a drift fishing session on the Rips south of Poole Dorset. As always I can’t resist a days filming and combined this with taking the opportunity to test out some new lures myself and with the crew.

I also took a 20lb class Mako 8ft boat rod to see if I could christen that as well and boy did I. Early start from Poole 7-00am and fishing with a good crew of guys some I have fished with before so had time to catch up with them as we steamed to a rough ground mark on The Rips.

Taking some establishing shots on the HD camera to kick off the movie as we were underway and despite near a two hour passage to the mark it just raced past and we all dropped down for the first drift. Caught the reef on the first drift but it pulled out, I changed the lure to a 4″ twin tail little fishy jig head rhubarb and custard ready for the next drift.

One of the guys Sean was into a nice cod so grabbed the camera and captured that into the net and some posing to camera. Second drift set up I hooked into a small pollock and Sean had another fish so out came the camera again. Third drift it happened and my rod arked over and at first I thought I had the reef again only a reef doesn’t nod it’s head like this was doing so I new I was into a good fish.

Taking my time I let the fish have line when it wanted to dive and when we had colour it became obvious it was a good sized Pollock. Once it was on board a couple of photo’s taken and we tried out some new Fishzone electronic scales and it tipped them at around 19lbs a personal best for me as previous around 12lb was best I have had. The weighing is on video to confirm this post BTW !!

Combined with getting in some fishing between filming (Sean) and the other guys we had some good Cod and Pollock coming on board so the mark was very productive for us all. I took some more pollock and a few nice Cod and changed the lures to test them out like our new jighead shads, all colours caught fish Cod and Pollock. Red tail worms with our jighead, fat tail jighead worms and the little fishy shad all proved not only do they look the buisness they also do the business and it’s on video too.

So a really useful and rewarding day on the Rocket and the ever jovial skipper Trevor Small on full form and we even had a Bar-B-Q cooking up some well tasty sausage dog rolls and the weather was pretty good too with low winds and the sun came out a few times too enough to leave me with a red face !

The movie will be live very soon to show just how good the day was and here are some images of the Pollock, a Cod for Sean plus some shots of the lures producing good fish and no there was Deffo no posing by hanging the lures from the fish’s mouth they caught and the video will confirm that too !!

Here are some images taken on the day, if I knew I would be starring in them I would have had a shave, but then again it was short notice film/fishing trip 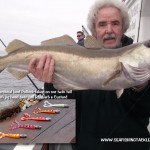 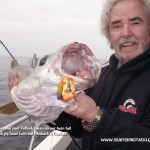 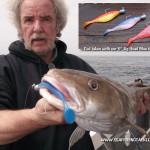 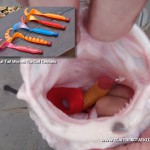 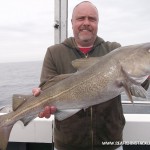 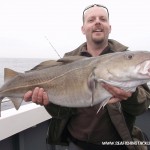