Bigheads and bombers review: After the initial tests out of Lymington and Weymouth chasing the Cod on the wrecks a few observations have been made on how the larger lures worked. The bombers worked well on the Lymington trip and took Cod to 16+lbs and with the tides that day the 11oz size in Orange proved itself and the 9/0 Sakuma hooks had no issues in connecting into the fish. Day one out of Weymouth I took the new versions of the smaller paddletail bigheads, medium size fat tails and the new crazy tails to try out. The rig was a 6″ S/S boom with 6″ Turbo Twitcher Paddletails sporting 9/0 hooks with no trace just direct attachment to the boom arm and slung below that one of the new bigheads. Action was to hop the teaser rig infront and over the wreck and first drop two fish on with larger bighead taking the bigger fish. More drifts and similar action on double fish each time, the rig was then changed just to the bigheads so all three designs could get a chance to prove themselves. More Cod and a few nice size ling to the large Orange fat tail and the blue veined crazytail, large number of fish were taken that day and the new lures and rig config worked well with the Superflex silicone rubber standing up to the pin sharp teeth of the Cod and especially the Ling taken with another bonus NO rigs lost to the wrecks. Day two out of Weymouth was a different story, stronger winds and bigger tides the 11oz bigheads and bombers were underweighted and took longer on the drop and obviously resulted in more line out, they still took fish but also with less control when the wreck approached more rigs were lost. I didn’t have larger weights with me to overcome the tides so the tests concluded with me changing to a more conventional hopping rig with 12oz ball weights and short traces with the turbo twitchers. Conclusion although these lures are primarily designed for use in Norway and Iceland chasing the big Cod and Halibut they have proved themselves in the UK but you need to take into account the tides you will be fishing to get the weights right and if wrecking take into account losses although by the time you have costed the posh pirks of similar weights or conventional rigs of booms, weight and lure there isn’t much difference in costs. This images show the main catching lures used and how they stood up to good number of Cod taken with them and the fat tail after landing a few ling and you can follow the release and availability of these lures here: http://seabooms.com/norway/salesinfo/lures.htm 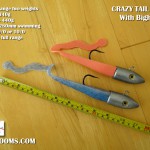 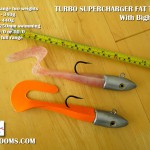 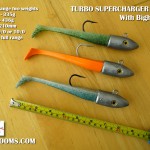 Sales page for fishing Norway and Iceland now live: http://www.seabooms.com/norway/salesinfo/lures.htm Plenty of info on the lures, seabooms, plugs, jigheads etc of suitable quality for catching large Cod, Coalies and Halibut and if you’re chasing Plaice out there see the seperate pages for my Plaice rigs. Images shown are from 2013 when the first of the lures were tested and some of the results on how they stood up to the size of fish taken out in Norway. Details are on the sales page of fishing holidays or visit Paul Stevens Sportquest FB page and contact him for more information. 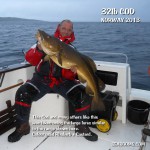 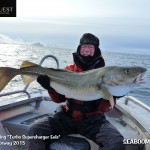 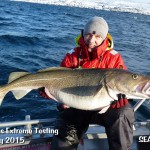 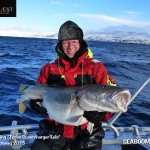 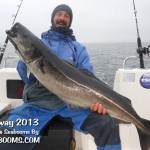 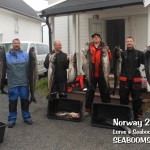 Image to answer the question raised on how the eyes and hooks are secured into the jigheads and lure bodies to handle the hard fighting fish caught in Norway Iceland and the UK if you get lucky ! The main eye is a long reach stainless steel loop with ends finished as shown and then wired to create a closure that the lead when pured locks it into place solid. The hook eye a pin is inserted at right angles to the shank prevent forward pull out and twist. The lure body Silicone when poured fills into the loose wound wire around the shank which is secured in place using a heavy duty high viscosity superglue. This wire may look a bit agricultural but it’s wound like that to get maximum silicone rubber penetration and it’s well tried and tested as it’s been used in all my lures since day one. Now the magnetic blocks have been sourced with a choice of two pull and hold rates they will be secured into the lure bodies at the time the moulds are filled, the pins are again secured with high viscosity superglue and the magnetice pull also assists holding the pins into the silicone rubber. The magnets selected will hold 6/0 and 10/0 trebles, or alternatively single stinger hooks to 14/0 weights and are coated to reduce rusting from salt water. As these lures are custom made to order the angler has a variety of options to set the lure up in weights, colours and hook arrangements to suit their angling requirements. Image shows the Cod bombers and the same principles are applied to all the range offered for my lures. 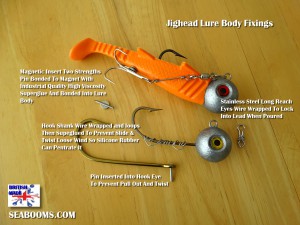