One of my goals fishing Norway was to catch Halibut and it happened for me more out of luck than actually fishing for them. We found a mark on the charts and decided to do a couple of test drifts to see what occoured. I had a test large Whackytail shad with 9/0 hook on a long flowing trace 2m approx. a 10oz weight using a sliding Portland rig. Lure colour was a blue ice GITD/UV and had been out of the box for around 30mins so had time to charge up. Depth was around 80m with slight variation on the drift and drift speed was just under 1knt. I was using a slow wind up to 30 turns and dropping to the bottom again plus varying the speed. First few drifts attracted some small Cod and then BINGO I hooked into what felt like a whopper and as one of my fellow anglers qouted “Don’t They Hang On”. Once we had colour and could see it was a Halibut albeit only just over 12lbs the power of these fish became apparent as it made repeated dives to get back home. Awesome little scrap and even better we had that for tea that night and it tasted superb. So a new PB just need to get out there again when the big bad boys arrive oh and will need a bigger rod methinks !! 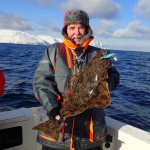 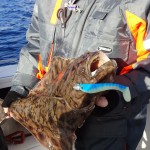