Looking back to the Offshore Rebel IV wrecking trip and kit and lures used the curltails again proved the killer lure taking Pollock of the day. The lures shown accounted for all the fish I caught and the ling jigs worked attracting the attention of some large pouting when loaded with a mackerel flapper and tipped with white squid skirt, no ling but as there was only one small ling caught on the trip they were obviously not on the prowl in numbers. The jig worked in the config previously shown without any tangles and only one jig lost to the wreck on very slow drifts. I fished all the lures on my 6″ S/S seabooms medium gauge and traces varied from 2m to 3m and with average fish takes 20 plus turns up from the wreck, they worked well with only a couple of rigs plus the ling jig lost to the wreck. With Cod taken on this trip hopefully more will show on my next trip out and chance to use some of the lures more dedicated to Codding. 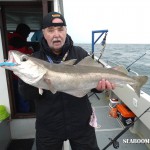 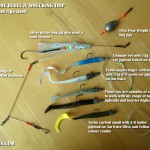