Trip analysis time I always like to look back on trips to see what worked and what didn’t and what to test out next time out. Last trip out fishing was different to previous in the depth that the Pollock were feeding at. Previous trip all fish taken were within 5 turns up from the wreck, last trip they were 20 – 35 turns up so well away from the wreck. Again my lure favourite worked see image and I fished with a 6″ lightweight 1mm stainless boom, another change too on previous trip I fished a short trace 1.5m as the fish were close to the wreck and that cut losses of gear. However that didn’t work with the fish feeding away from the wreck, longer traces were needed up to 4m especially when tide was running so what worked one day didn’t work the next. Other lures tried worked and suprisingly the turbo worms fished unweighted with 6/0 and 8/0 hooks took whiting and pesky pouting liked them too and I tried the new worm weights when tide picked up. The ling well I wasn’t expecting to fish for those so had to get by using pre-made pennel cod rigs again fished on the lightweight boom and ball weight loaded with a mackerel fillet and tipped with skinned squid nice white flesh, first drop and Bingo into a nice fish and I knew I had to let the fish and reel clutch do the business but it worked and fish got landed. Images show the actual rig and lures used and lost only one set of kit to the wreck. 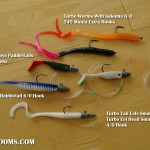 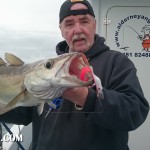 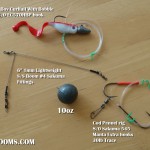