New Kid On The Block skipper Jamie Pullin posts his first report with catch images and his anglers are into the fish from the first drop out on the Weymouth wrecks. A new crewman Connor gets his first outing and is in the skippers chair straight away enjoying the whole experience.

So 2016 gets away to a flying start with my first trip of the year. With a brisk north west wind cold enough to make a penguin feel right at home the lads assembled on the boat. With our forecast for the day being decreasing winds we set out on the first of many trips of the year.

After having a good catch up with the lads on the way out we arrived on our wreck with not a boat in sight. With a good steady run of large pollock throughout the day and as predicted the wind begining to ease and leave us with a lovely spring day. Even a little move to another wreck at the end of the day produced some more great condition fish.

As well as being the first of the year it was also a first for my new crew Connor who embraced the whole day, armed with his net he very successfully landed every fish with no problem. I even let him have a go on the wheel to get a feel for the old girl. Grinning from ear to ear he steamed us homeward.

With the diary filling fast now to ensure your chance to catch some of these great condition fish you can email me at jay@deepsea.co.uk or phone me on 07886931460.

There is a couple of spaces available on the 20th of March and a new day to fill 27th Easter Sunday wrecking on both days. Also a turbot , brill and we hope the odd plaice trip on the 3rd of April. If that takes anyone’s fancy. 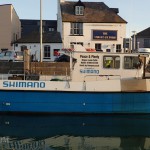 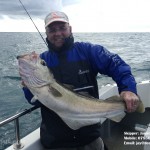 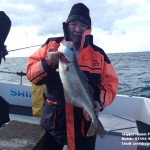 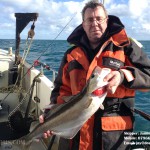 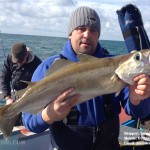