Didn’t We Do Well ! After more cancelled trips I managed to get afloat for another days wrecking from Weymouth on board the Katie Ann skippered by Paul Davies. Many of the anglers I had fished with before and some new faces too all good keen fishermen so it looked like a promising day was ahead. Forecast was for sun with winds picking up in the afternoon so the skipper once out the harbour gunned the Cougar Cat to get to the first wreck asap expecting an early finish due to the weather forecast. 90 mins approx and we were on the wreck and first drop I and many were into fish, my first lure choice was a sample eel lure body on one of my Turbo Jigheads and that took a couple of fish with fish being taken by others using shads and sidewinders and again the Rhubarbs not fishing that well. All the fish were small 4-6lb region but we were catching so all happy chappies. Then the skipper told us we were going to shift to another wreck to seek out some larger fish, crew not happy when this wreck was fishing ok !! It turned out best decision made and as the wreck was further south only about 5 miles we arrived very quickly and fishing again. Bingo much larger fish started coming aboard top end single figures and into doubles. Weather forecast was for winds picking up well that didn’t happen and from mid morning the sunshine was like a summers day and winds actually eased. The wreck was producing good fish but the skipper decided we all had enough and it wasn’t right to just take fish just for the sake of it and deplete the stocks which was the right call, so we moved to another wreck just to see how it fished while he filleted all our catch. Bang ! into a double and Tony next to me was in as well it just couldn’t have been scripted better than this. Top fish of the day was a 23lb Ling taken on a pearl sidewinder and something much larger had grabbed its tail at sometime and a good double Pollock to Tony. A truly great day and with all taking good fish and plenty for the freezer we arrived back in harbour by 5-0pm ready for a fish & chip supper !!! …. Weymouth Rocks Again ! 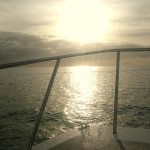 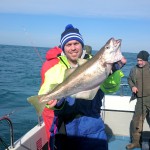 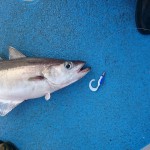 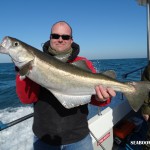 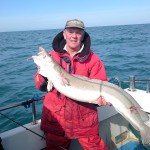 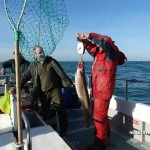 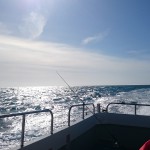