Well what can I say on what was virtually a text book days wreck fishing and a big kick in the ass for the last No Score trip. Weather firstly was dreadful and nothing like forecast, we had cold winds in out faces, bumpy large sea swells and mist virtually all day. With the seas being so lumpy it took longer to get to the wreck that Paul on the Katie Ann out of Weymouth had decided would produce a good volume of fish.

His boat has 4 large Ice boxes and it was agreed that once they were filled we would leave the wreck and move to the banks for a hit of Turbot or plaice. Problem with Pollock and many deepwater fish they do not survive once landed so they can’t be returned live. Most skippers and anglers insist that a catch enough rule is applied and then move on or come home and despite I have all my family and some friends who love fresh fish from me there is a cut off point.

So we arrived on the wreck and the first drift was setup, there were fresh live sandeels on the boat and I setup a 10″ plastic sea boom with a 10oz weight and a 5/0 fine wire aberdeen hook on a 10ft trace. There were 9 fishing and with wind against tide the traces would probably have to be shortened to reduce tangles as the boat spun round like a top on some drifts.

1st drift produced a few average pollock all I had were snatches that took the eel off. 2nd drift I hit on a small pollock about 5lb and as most of the larger pollock coming on board were being taken on artificials, I had a better fish of around 7lb on live eels but I changed to 178mm Red Gill original with a 6/0 hook on a short 6ft trace for the third drift.

Bang ! just coming of the back of the wreck I felt two snatches and then the rod my new Akita 20lb class 7ft just bent over as the fish dived for the wreck. I also had a new Spyder LW20 with 44lb braid on and the click stop star drag worked superb giving the fish line when it decided to dive.

I pumped it up from 200ft and new it felt decent and it was, a top end single figure fish was soon on the deck, see the image with the black and orange Red Gill well hooked in the scissors. This is how it continued until we decided we all had enough fish and it was time to move on. Over fishing a wreck depletes stocks that take a long time to grow again so this has to be taken into account.

What was also good about this wrecking session for me anyways I lost NO GEAR !! I used the same articial throught the drifts and apart from one snag which broke the sea boom that was all it cost me, does it get much better than that.

Skipper asked why I strike at the fish well that is what it looked like but in fact what I do when I wreck is hit bottom or the wreck and then immediately pull up to clear the wreck and then start the wind up but it does look like I’m striking into the fish which is obviously a No No !. Using this method reduces my snags on the wreck to a minimum and it works well.

So with the ice boxes full we set off back to fish the shambles bank and see if the Turbot wanted some. I set up a sliding ledger rig with a 6oz clock weight and a single 6/0 wire hook baited with the side of a large Launce. First drift nothing, second drift had a couple of nibbles and I gave it line to see if it developed into a Turbot but as I thought nothing.

On Turbot drifting I always hold the rod as bites can be easily missed if you don’t, the drift finished and I wound back and low and behold a small Plaice on the end. Too skinny to keep it went back to fatten up for my next session which is planned for the 25th March and we will fish the banks all day so looking forward to that one as usual. 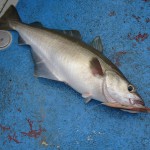 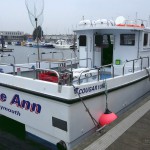