Well what a wonderfull day treated to a glorius autumn sunrise at Ramsgate Kent On the Skerry Belle Charter Boat with Roger Lennon and a mixed crew of new faces and all of us keen to get onto the magnificent fish that this area offers. First mark targeting skate using a basic Portland rig with 1.5m trace rigged pennel style and two 6/0 Aberdeen hooks, bait were chunks of herring nothing fancy just cut the head off and cut into three chunks and discard the tail. First drop a small ray, then another along the boat and a codling not a bad start. More rays and the usual dogs kept us active until the tide died away and so did the fish. So a move to deeper water and see if we could find some Cod, with slackwater and no tide it took a while to kick off and the rays started coming thick and fast, David Zippy Long after a lot of effort earlier started landing some nice size rays and similar so did others and I was getting a fish a chuck virtualy. I put a second uptide rod out and that saw plenty of action with both rods into fish at one stage. So I can claim the honours as top rod catch wise and heaviest fish at 11.5lbs oh and a new PB for me in the time it took me to eat two bacon sanwiches on a boat when inconsiderate fish kept jumping all over my baits !!! as to Cod well I suppose I will just have to go fishing Again to hit those … Bummer Eh! 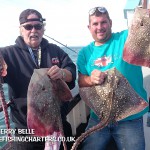 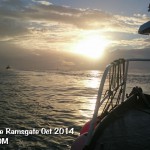 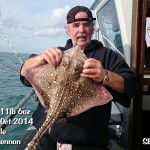 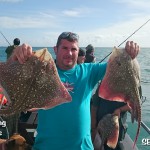