When you come up with a new lure design you can make it and test it in the tanks but at the end of the day it’s the sea trials that prove if it’s any good taking fish and standing up to sharp teeth and strong takes. Yesterdays sea trials proved a great success taking some nice Pollock with a variety of colours patterns and sizes of lures. The new Turbo Fish was tried first with a large size olive Ice colour loaded with a 9/0 hook and 20g head, on the second drop bingo fish on and after landing the lure was inspected for damage but good to go it went for another swim and bingo another fish. I changed to a smaller blue ice fish with 4/0 hook 13g head and that little fish took a good few Pollock and you can see the teeth marks but it stood up well. I had some supersoft large pearl ice turbo fish and needed to see how that swims and how durable it would be. Again on a roll it took fish and stood up to those pin sharp teeth. The larger Whackytails a lure designed more for Cod than Pollock but it attracted the attention of a couple of nice fish, along with using my awesome eels and the well proven turbo tail eels small size loaded onto a 13g 4/0 turbo head a good sea trial session and the X2 Mk2 silicone stood up well so these will be ready to roll and in my store shortly. The images show lures used and how they sustained multiple hookups and remain still fishable for future trips. 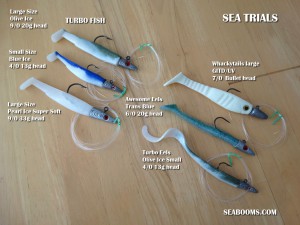