Lures used on yesterdays Pollock fishing on Katie Ann out of Weymouth and all colours worked well with the small blue pearl white Turbo Fish coming out on top so size doesn’t matter !! that lure is now on it’s second outing and has accounted for a good number of fish and still going strong. I’ll fish that again on the next trip see how long it stands up before it’s Ass drops off. The GITD/UV pink tailed turbo eel created some attention especially in the morning when water was coloured, the big Cod Bomber enjoyed a few drifts in the afternoon and the sea had cleared so was very visible and swam well with very fast drop to the wrecks and without hangups so good to go now. There was also a pearl fish and rhubarb & custard used but the wrecks claimed those but they earned their cost with some nice fish so owes me nothing. Even the good old faithfull jelly worm had some takes mostly I suspect pouting on the last wreck we tried. 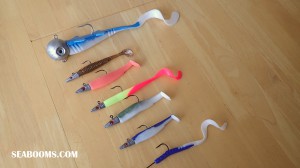