What an amazing day, good weather, great crew and tremendous fishing fast and furious after a slow and frustrating start. Early departure which meant we arrived on the first mark a tad too early as the tide was dwindling and it wouldn’t pick up again until around 10-30 so apart from half a dozen nice size Cod taken little action was accouring much to the frustration of the skipper. We gave it best and a move to another wreck was actioned. On arrival first drop we were all into fish, nice prime Cod and couple of respectable size Pollock and that continued until the tide started to die away again and the pouting made a nuisance of themselves and catching them screwed up the drift for many of us. But by now we all had enough fish for the freezers and we headed home at approx 1400hrs and as the skippers attitude is don’t rape the wrecks only take what you need so the wreck can fish another day and we all agreed to that. Softatil Flexishads did the business and others tried especially UV Orange Turbo Fish large I hooked into some nice Cod and also induced and dropped a good number of half decent takes. So another Result and Weymouth Rocks Again !! Not taken loads of happy snaps but I managed a couple with the help of The Rickster (aka I’m not David Bailey) nice one Bud ! 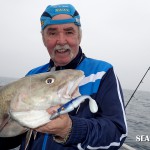 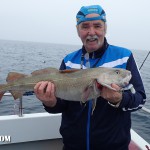 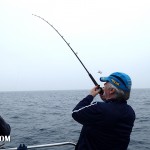 When I fish Weymouth I have at least a two hour drive and with it being a Friday the drive home took considerably longer down to traffic and poor weather conditions but it gives you time to reflect on the days fishing. This is a report I was excited about writing and you will see why as it develops. Great start to the day weather wise glorious sunrise, low winds and temperatures around 6c. The crew apart from one were all new faces but very keen experienced anglers getting to sea after many cancelled trips. Weather forecast was against us with wind and rains due around mid day and as we steamed out to the wreck sea state was already lumpy but with wind direction and tides fishing was do-able. Arriving at the first wreck around 1000hrs and first drop every one apart from one where into fish and the one who wasn’t was ME !! simple fact I wasn’t ready to start the drift so my bad and missed those early takes. But all was resolved on the next drift and again most of us including me were into fish and some klonkers coming aboard with the skipper Clem Carter and his crewman Rik Gold they were well busy charging round the boat landing fish. That scenario continued throughout the morning with many double figure fish and one at 19.5lbs we weighed it were taken. Around mid day winds were strengthening and the sea was heaping up but we were still taking quality fish. My brief for the day was to sea trial two new lures my Turbo Fish and the Whackytails medium and large size and yes they took good fish so well happy with their perfomances and I also had good sport with my ultra light spinning rod and baitcaster reel loaded with 20lb braid that really was exciting fishing. I also used some other popular lures and although the fish were taking most lures the technique was long flowing traces with fast winds up to 40 turns and most of my fish it was a quick take and continue winding to induce the connecting take. Around 1300hrs the skipper and crew agreed to call time for two reasons main one we all had enough fish to take home so why deplete the wreck stocks and most important winds were getting heavy and rain and sleet had set in so it was getting uncomfortable and we were mid channel 35miles out. Heading back to port the skipper and crewman filleted all the fish for us and we bagged them up ready for the freezers. So marks out of 10 for a good fish producing trip has to be 15 ! apart from weather you couldn’t have asked for a better trip. These images show some of the good sized fish taken and even the skipper Clem Carter got in on the action and why not he put his boat Wild Frontier II on to some great fishing so respect….. Roll on the next one. 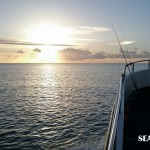 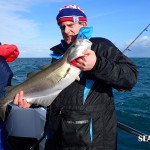 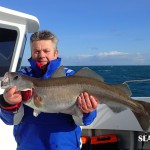 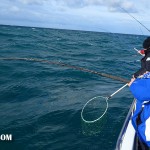 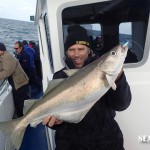 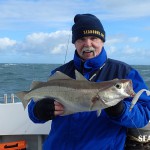 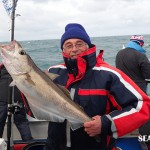 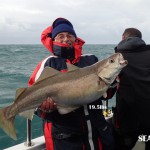 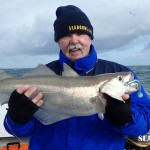 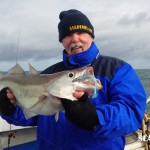 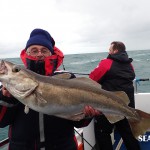 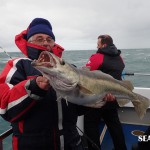 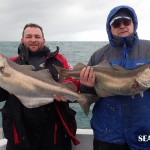 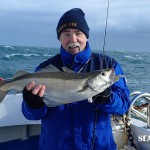 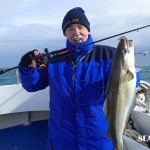 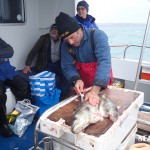